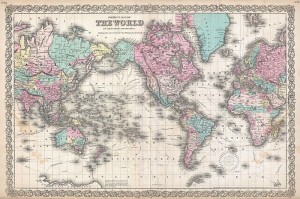 When I completed my CELTA (the initial training course for EFL teachers) and considered all the places in the world I wanted to travel to and teach in, I faced some, half-joking, accusations that what I was about to do aided some covert imperialist agenda. Was I a modern-day missionary, an ELT evangelist preaching Received Pronunciation, sermonising about sentence structure, bearing witness to SVO word order? Was I an unwitting foot soldier in the building of a new English Empire, annihilating native languages, crushing cultures, promulgating Western capitalist ideals?

That hadn’t been my intention.

Nevertheless, in his book, Linguistic Imperialism, Phililpson argues that English-speaking nations have, since the 18th century, sought to promote English overseas for political and economic reasons. Harold Victor Routh, an advisor to the British Council in the mid-twentieth century wrote, ‘Every nation now being educated is also possessed by ideas, opinions, doctrines, and these have to be canalised, no less than economic resources…We have to capitalise brains even more consistently than national debts’. This is not a view the British Council takes these days.

The concept of education as a means of control is not limited to English language teaching, the historian Harvey Graff, writing about mass education in England in the 19th century, points out that literacy was ‘the best medium for tutelage in values and morality’ and ‘properly schooled workers possessed a number of qualities: punctuality, respect, cleanliness, discipline, subordination and the like’. However, students do not necessarily learn what is taught.

The first country I went to was the Czech Republic, eight years after the Velvet Revolution and the collapse of communist Czechoslovakia. Aged 19 and with only a 4-week CELTA course and some summer school experience in Norfolk, I probably learnt a lot more from my students (about history and philosophy as well as English grammar) than they did from me.

At the time in the Czech Republic English was taking the place of Russian as the second language of choice. In Indonesia, later in my travels, I found my students spoke Javanese (often several distinctly different registers of Javanese) as well as Indonesian. There are few people in the world who speak only one language, bilingualism is the norm. Code-switching (switching between languages, or language varieties, within one conversation) is common among bilinguals, a particular language lending itself more readily to different types of communication or the formation of a different aspect of social identity. One language needn’t replace another.

The Czechs have a saying, ‘Learn a new language, get a new soul’, this needn’t be a replacement soul, it could be an auxiliary soul. Surely we could all do with a spare soul!?

A study in December 2011 found that 56% of websites use English as their content language. It is a global language and, as such, access to English enables access to global ideas and debate. Education can be liberation. English as a global lingua franca is anyway constantly evolving, it is no longer the preserve of the UK or the USA. As David Graddol points out, in this century those who speak English alongside other languages will outnumber English mother-tongue speakers and it is they who will decide the global future of English and English teaching.

But for now, to guard against charges of imperialistic intentions, we need to listen to and learn from our students. They should have control over the content of classes, ultimately taking charge of their own learning.