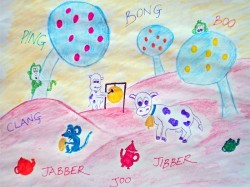 My daughter, Lyra, is learning a poem for a school poetry competition. She wanders around the house muttering lines and rhymes to herself, making up new ones when she forgets the original (which she often does).

Listening to Lyra’s evident enjoyment of the poem I began to wonder what it is about rhyme that we find so appealing.

Many cultures have used rhyme. During the Tang Dynasty in China (618 – 907AD) would-be civil servants were expected to memorise and write rhyming poetry for the Imperial Examination. The Imperial Examination, in theory open to all, was an unusual attempt at creating a meritocratic autocracy based on intellectual achievement rather than hereditary power.

Anglo Saxon verse tended to rely on alliteration rather than rhyme for poetic effect, a tradition that continued into the 14th century, for example in Piers Plowman:

In England we didn’t start to use rhyme in poetry until around the 11th century but rhyme did eventually take over from alliteration as poetic form. It has been suggested that our love of rhyme has led us to adopt words from other languages (borrowings).

Both rhyme and alliteration are forms of repetition of sound. Repetition has been shown to aid memory, which is particularly useful in a preliterate society.

An interesting study by Matthew McGlone seems to suggest that rhyme is more than a mneumonic device. He found that people tend to place more trust in rhyming statements than they do in similar statements that do not rhyme. He calls this effect ‘rhyme as reason’ and suggests we allow the ‘beauty of a phrase to validate its truthfulness’.

It has been suggested by evolutionary psychologists that rhyme is a form of handicap we impose on certain types of communication, e.g. poetry, to make it harder and therefore a reliable sign of the verbal intelligence and general fitness of the author.
Christopher Ricks (in ‘Dylan’s Visions of Sin’ pub. Harper Collins, 2005) writes that ‘rhyme is one of the forms that metaphor may take, since rhyme is a perception of agreement and disagreement, of similitude and dissimilitude’ (p.32). A ‘true rhyme’, he says, is one which metaphorically associates both word forms and meaning.

Aristotle, in Poetics (350 B.C), wrote, ‘the greatest thing by far is to be a master of metaphor. It is…a sign of genius, since a good metaphor implies an eye for resemblance’. So perhaps, as well as encouraging vocabulary acquisition, rhyming may inspire genius through promoting flexibility and precision of thought?

This doesn’t seem to have a lot to do with Lyra’s chosen Spike Milligan poem: ‘On the Ning Nang Nong/where the cows go bong/and the monkeys all say BOO!’ (but you never know!).