No. 8 Gulliver’s Travels by Jonathon Swift 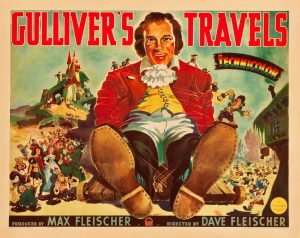 Gulliver goes on a series of sea voyages. On the first trip he’s shipwrecked and ends up on the island of Lilliput where he is imprisoned by tiny little people who are at war with their neighbours over which end of a boiled egg is the correct end to crack. After he escapes and returns home he goes on a second sea voyage. This time his shipmates abandon him on the island of Brobdingnag, an island of giants. On Gulliver’s third sea voyage his ship is attacked by pirates and he visits four more fictional places and Japan, he meets magicians, ghosts of famous historical figures and an Emperor. Undeterred by his previous misfortunes, once Gulliver returns home he decides to go to sea again. He is given the post of ship’s captain but his crew mutinies and abandons him on an island ruled by talking horses and peopled by deformed savage humans called ‘Yahoos’. Eventually he returns home where he spends the rest of his days talking to his horses. Published in 1726. You might like to try an abridged version as the language is rather archaic (see excerpt below).

Lilliputian Hallucination A visual hallucination in which things – people, animals, objects – seem smaller than they would in real life.

Excerpt from Chapter One

I lay down on the grass, which was very short and soft, where I slept sounder than ever I remembered to have done in my life, and, as I reckoned, about nine hours; for when I awaked, it was just day-light. I attempted to rise, but was not able to stir: for, as I happened to lie on my back, I found my arms and legs were strongly fastened on each side to the ground; and my hair, which was long and thick, tied down in the same manner. I likewise felt several slender ligatures across my body, from my arm-pits to my thighs. I could only look upwards; the sun began to grow hot, and the light offended my eyes. I heard a confused noise about me; but in the posture I lay, could see nothing except the sky. In a little time I felt something alive moving on my left leg, which advancing gently forward over my breast, came almost up to my chin; when, bending my eyes downwards as much as I could, I perceived it to be a human creature not six inches high, with a bow and arrow in his hands, and a quiver at his back. In the mean time, I felt at least forty more of the same kind (as I conjectured) following the first. I was in the utmost astonishment, and roared so loud, that they all ran back in a fright; and some of them, as I was afterwards told, were hurt with the falls they got by leaping from my sides upon the ground.