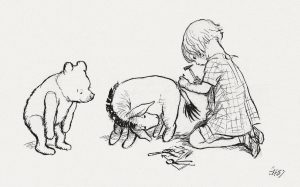 This is a much-loved children’s classic about a boy, a bear, a little pig and various other animals who live in a wood. It has been translated into many languages since it was written in 1925 so, chances are, you already know the characters and stories.

Eeyore /ˈiːɔːr/  (n.) a very negative or pessimistic person Stop being such a Eeyore, everything might be fine in the end.

Pooh Sticks (n.) a game which involves throwing twigs into the water from one side of a bridge and seeing whose twig emerges first from the other side of the bridge. The World Pooh Sticks Championship takes place in Oxfordshire every year.

Excerpt from Chapter One

Winnie-the-Pooh sat down at the foot of the tree, put his head between his paws and began to think.

Then he thought another long time, and said: “And the only reason for being a bee that I know of is making honey.”

And then he got up, and said: “And the only reason for making honey is so as I can eat it.” So he began to climb the tree

How a bear likes honey?

See also: Disney has adapted many of the stories.