No. 7 Strange Case of Dr. Jekyll and Mr Hyde by Robert Louis Stevenson

This is a short novel published in 1886. Part horror, part detective story, I can’t say any more about the plot in case you don’t already know the story. 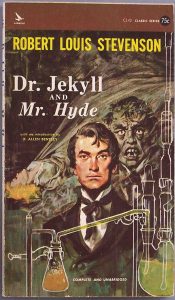 Themes It is about good and evil, the conscious and unconscious mind, Victorian respectability, and an early interest in multiple personality disorders.

Jekyll and Hyde \ˈje-kəl-ən-ˈhīd also ˈjē- or ˈjā-\ used to describe a person who changes completely from one situation to the next: The rally was the latest example of Trump as a Jekyll and Hyde public performer, coming just 24 hours after a sober speech to the military setting out future strategy in Afghanistan.

Nearly a year later, in the month of October, 18–, London was
startled by a crime of singular ferocity and rendered all the more
notable by the high position of the victim. The details were few
and startling. A maid servant living alone in a house not far
from the river, had gone upstairs to bed about eleven. Although a
fog rolled over the city in the small hours, the early part of the
night was cloudless, and the lane, which the maid’s window
overlooked, was brilliantly lit by the full moon. It seems she
was romantically given, for she sat down upon her box, which stood
immediately under the window, and fell into a dream of musing.
Never (she used to say, with streaming tears, when she narrated
that experience), never had she felt more at peace with all men
or thought more kindly of the world. And as she so sat she became
aware of an aged beautiful gentleman with white hair, drawing near
along the lane; and advancing to meet him, another and very small
gentleman, to whom at first she paid less attention. When they
had come within speech (which was just under the maid’s eyes) the
older man bowed and accosted the other with a very pretty manner
of politeness…And then all of a sudden he broke out in a great
flame of anger, stamping with his foot, brandishing the cane, and
carrying on (as the maid described it) like a madman. The old
gentleman took a step back, with the air of one very much
surprised and a trifle hurt; and at that Mr. Hyde broke out of all
bounds and clubbed him to the earth. And next moment, with
ape-like fury, he was trampling his victim under foot and hailing
down a storm of blows, under which the bones were audibly
shattered and the body jumped upon the roadway. At the horror of
these sights and sounds, the maid fainted.

Also see: The book has been adapted for film many times, most recently there has been an American adaptation starring Gianni Capaldi (2017).