No. 6 Robinson Crusoe by Daniel Defoe 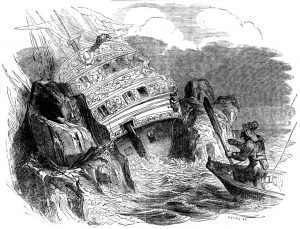 The story of a man – Robinson Crusoe – shipwrecked in the Caribbean. Much of the action centres on his efforts to survive on a deserted island, while much of the narrative is concerned with Crusoe’s relationship with God and the possibility his predicament is punishment for being a slave trader.

At some point Crusoe rescues a man from cannibals and the man stays with him as a servant). Crusoe names the man ‘Friday’ and teaches him English because it doesn’t occur to Crusoe to learn the man’s actual name or language.

The book was written in 1719 and is sometimes described as the first English novel. As the English is so old-fashioned (have a look at the excerpt below) it may be a good idea to read an adaptation. A simplified version can be found here.

Themes Imperialism, Colonialism, cultural relativism. It was a popular book when first published and, I think, it says a lot about British imperialist attitudes of the time.

Robinson Crusoe /ˌrɒbɪnsən ˈkruːsoʊ/
(n.) a castaway, someone cut off from the rest of the world. During World War II, people who decided to stay and hide in the ruins of the German-occupied city of Warsaw for a period of three winter months, from October to January 1945, when they were rescued by the Red Army, were later called Robinson Crusoes of Warsaw

The wave that came upon me again buried me at once twenty or thirty feet deep in its own body, and I could feel myself carried with a mighty force and swiftness towards the shore – a very great way; but I held my breath, and assisted myself to swim still forward with all my might. I was ready to burst with holding my breath, when, as I felt myself rising up, so, to my immediate relief, I found my head and hands shoot out above the surface of the water; and though it was not two seconds of time that I could keep myself so, yet it relieved me greatly, gave me breath, and new courage. I was covered again with water a good while, but not so long but I held it out; and finding the water had spent itself, and began to return, I struck forward against the return of the waves, and felt ground again with my feet. I stood still a few moments to recover breath, and till the waters went from me, and then took to my heels and ran with what strength I had further towards the shore. But neither would this deliver me from the fury of the sea, which came pouring in after me again; and twice more I was lifted up by the waves and carried forward as before, the shore being very flat.