No. 2 A Christmas Carol by Charles Dickens 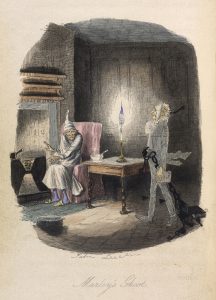 Most of Dickens’s novels are considered classics. A Christmas Carol is the shortest and has always been the most popular. Set in Victorian London it tells the story of Ebenezer Scrooge, an awful miser, who is financially rich but spiritually and emotionally poor and his path to redemption via three ghosts.

Themes: Poverty, inequality, injustice, friendship, family, ghosts. Dickens was a social campaigner whose novels highlighted the terrible poverty in Victorian London and brought it to the attention of the wider public. This book also had a great influence on shaping the traditional English Christmas.

Dickensian /dɪˈkenziən/(adj.) of or reminiscent of the novels of Charles Dickens, especially in suggesting the poor social conditions or comically repulsive characters that they portray: the backstreets of Dickensian London (Oxford English Dictionary)

Merry Christmas /ˈmeri/ /ˈkrɪsməs/ (greeting) Although the term can be traced back to 1534, Dickens’s use in this book published in 1843 made the phrase a popular Christmas greeting.

Scrooge /skruːdʒ/(n.) a person who is mean with money: Don’t be a Scrooge and drive away without putting some cash in the collecting tins. (Oxford English Dictionary)

Marley was dead: to begin with. There is no doubt whatever about that. The register of his burial was signed by the clergyman, the clerk, the undertaker, and the chief mourner. Scrooge signed it. And Scrooge’s name was good upon ‘Change, for anything he chose to put his hand to.

Old Marley was as dead as a door-nail.

Mind! I don’t mean to say that I know, of my own knowledge, what there is particularly dead about a door-nail. I might have been inclined, myself, to regard a coffin-nail as the deadest piece of ironmongery in the trade. But the wisdom of our ancestors is in the simile; and my unhallowed hands shall not disturb it, or the Country’s done for. You will therefore permit me to repeat, emphatically, that Marley was as dead as a door-nail.

Scrooge knew he was dead? Of course he did. How could it be otherwise? Scrooge and he were partners for I don’t know how many years. Scrooge was his sole executor, his sole administrator, his sole assign, his sole residuary legatee, his sole friend, and sole mourner. And even Scrooge was not so dreadfully cut up by the sad event, but that he was an excellent man of business on the very day of the funeral, and solemnised it with an undoubted bargain. The mention of Marley’s funeral brings me back to the point I started from. There is no doubt that Marley was dead. This must be distinctly understood, or nothing wonderful can come of the story I am going to relate…

Also see: There are loads of film adaptations of this including one starring Mickey Mouse and another played by the Muppets. I like Alistair Sim in the 1951 ‘Scrooge’. 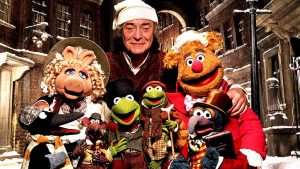