Fiction or factual, poetry, newspapers or magazines, lengthy books or short stories – they can all help improve vocabulary, grammar, writing and, ultimately, speech. However, while all books may be equal in this respect, some books are more equal than others!*

Here is the first of my top ten books which have contributed to the English language. While it isn’t strictly necessary to read the books to understand the meaning of the words or phrases they have given English, you’ll probably find them easier to remember and use if you do (and, who knows, you might even enjoy the books!). 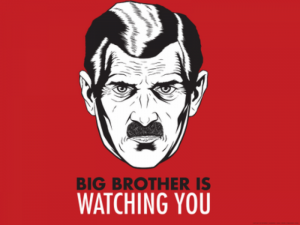 Intro: Orwell wrote this in 1948 after becoming disillusioned with the Communist regime in Russia. The novel is set in a future dystopia in which people’s lives are almost wholly controlled by The Party. It is regarded as a classic and its themes are as relevant today as they were in 1948. So relevant, in fact, that this book has given more words and phrases to everyday English than any other work of fiction I can think of.

Big Brother (n.) ‘a person or organisation exercising total control over people’s lives: Big Brother will be watching you from this week when spy cameras start to operate in Essex. (as a modifier) for executives who want the Big Brother touch, there are monitoring systems to keep track of employees’. (Oxford English Dictionary)

Doublethink /ˈdʌb(ə)lˌθɪŋk/ (unc. n) the acceptance of contrary opinions or beliefs at the same time, especially as a result of political indoctrination (Oxford English Dictionary). The extent to which his brain is riddled with double-think is demonstrated later in the interview, when he insists that world trade is putting Europe in the shade, meaning Britain needs to get out the customs union and spread its wings. At no point does he realise that by leaving the single market and customs union we also lose access to the “customs facilitation agreements” it has with other countries http://www.politics.co.uk/blogs/2017/08/14/hammond-gets-into-bed-with-the-brexit-headbangers

Groupthink /’ɡruːpθɪŋk/ (unc. n.) the practice of thinking or making decisions as a group, resulting in typically unchallenged, poor-quality, decision-making: there’s always a danger of groupthink when two leaders are so alike (Oxford English Dictionary)

Thoughtcrime /’θɔːtkraɪm/ (n.) an instance of unorthodox or controversial thinking considered as a criminal offence or as socially unacceptable: They are persecuting colleagues who are guilty of thoughtcrimes. (Oxford English Dictionary)

Thought Police /θɔːt/ /pəˈliːs/ (n.) a group of people who aim or are seen as aiming to suppress ideas that deviate from the way of thinking that they believe is correct: curse those politically correct thought police! (Oxford English Dictionary)

Orwellian /ɔːrˈweliən/ (adj.) relating to a political system in which the government controls every aspect of people’s lives: a frightening view of an Orwellian future. (MacMillan Dictionary)

Unperson /ʌnˈpɜː(r)s(ə)n/ (n.) (pl. unpersons) a person whose name or existence is denied or ignored, especially because of a political misdemeanour: Mr Watson told the Financial Times he had become an “unperson” after he “was outed as believing in IQ” in 2007 http://www.telegraph.co.uk/news/science/11261872/James-Watson-selling-Nobel-prize-because-no-one-wants-to-admit-I-exist.html

Excerpt: Part One, Chapter One

It was a bright cold day in April, and the clocks were striking thirteen. Winston Smith, his chin nuzzled into his breast in an effort to escape the vile wind, slipped quickly through the glass doors of Victory Mansions, though not quickly enough to prevent a swirl of gritty dust from entering along with him.

The hallway smelt of boiled cabbage and old rag mats. At one end of it a coloured poster, too large for indoor display, had been tacked to the wall. It depicted simply an enormous face, more than a metre wide: the face of a man of about forty-five, with a heavy black moustache and ruggedly handsome features. Winston made for the stairs. It was no use trying the lift. Even at the best of times it was seldom working, and at present the electric current was cut off during daylight hours. It was part of the economy drive in preparation for Hate Week. The flat was seven flights up, and Winston, who was thirty-nine and had a varicose ulcer above his right ankle, went slowly, resting several times on the way. On each landing, opposite the lift-shaft, the poster with the enormous face gazed from the wall. It was one of those pictures which are so contrived that the eyes follow you about when you move. BIG BROTHER IS WATCHING YOU, the caption beneath it ran…

* A paraphrase of ‘All animals are equal but some animals are more equal than others’, Animal Farm, George Orwell.