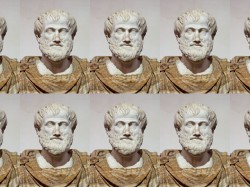 When people send me their work for editing they most often ask me to check for repetition. There seems to be a general fear of repeating words and phrases in writing and an idea that we must always find synonyms, which are plentiful in English.

However, there is a reason we have so many words in English. There is no such thing as an exact synonym, if there were then one of the words would probably fall out of use. Take the word ‘think’. A dictionary might offer as synonyms – cogitate, consider, believe, cerebrate, opine, suppose, imagine, reckon, guess, expect, anticipate, evaluate, judge, remember, retrieve, recall, recollect, envisage, imagine, concentrate, focus, intend, mean, conceive. But even if there are words that have the same denotation, they have different connotations: they are used in different registers (more or less formal), or different contexts. ‘Synonyms’ always have slightly different meanings.

Repetition can be used to good effect. There are many examples in rhetoric.

– the repetition of the last word of a preceding clause at the beginning of the next clause, e.g. “Fear leads to anger. Anger leads to hate. Hate leads to suffering”. Yoda, Star Wars.

– the repetition of words at the end of successive phrases or clauses e.g. “Government of the people, for the people, by the people”.

– the repetition of a word functioning as a different part of speech, e.g. “The future is no place to place your better days” Cry Freedom.

– the repetition of vowel sounds e.g. lake /leɪk/ and fate /feɪt/. (Incidentally, the example Michael Cain gives in Educating Rita of ‘swan/stone‘ is not assonance but consonance).

– the repetition of sounds at the beginning of words e.g. On the Ning Nang Nong….

If you’re interested in rhetoric, read Sam Leith’s You Talkin’ to Me: Rhetoric from Aristotle to Obama, I really can’t recommend it highly enough!