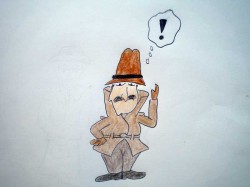 Thanks to the Romans, the Angles, Saxons and Jutes, the Vikings, and the French, English is an interesting and varied language happy to absorb new words and adapt to new influences. English has embraced words from around the world, and massively simplified the Germanic inflectional system of Anglo-Saxon.

And yet, I feel, there are still basic deficiencies in our language.

Does ‘we’ include me?

Indonesian has two words for ‘we’: ‘kita’ and ‘kami’. ‘Kita’ means ‘we including you’ and ‘kami’ means ‘we, excluding you’. It’s a useful distinction. It means we can avoid situations like this:-

Person 1: We’ve been invited to a party!

Person 2: Great! I’ll get changed and book a babysitter, you call the taxi!

In Indonesian it’s much simpler:

And everyone knows where they stand (even if it’s standing at the kitchen sink for the evening).

Bryson (‘Mother Tongue’ pub. Penguin, 1990 p.19) notes that Hawaiian creole differentiates between ‘I bin go store go buy shirt’, meaning ‘I went to the store and bought a shirt’, and ‘I bin go store for buy shirt’, meaning ‘although I went to the store intending to buy a shirt I came away without having purchased one’. There’s just no way to make the same distinction so succinctly in standard English.

The white hat or the hat white?

I also prefer languages in which adjectives follow the noun. Rather than saying ‘the white hat’ (Adjective + Noun, as 373 languages would have it according to the World Atlas of Language Structure), for example, the French (along with 877 other languages putting the noun first) would say ‘the hat white’ (le chapeau blanc).  This makes more sense, I think. Imagine the scene….

(Shots are heard. Miss Marple shuffles arthritically into the library. She sees Professor Plum’s body on the floor seeping blood into the Persian carpet. His eyelids flutter. He draws a laboured breath.)

Professor Plum: The jewels are in the white….(he dies)

Miss Marple: White what? Speak up, Professor! This white hat or that white desk? The White House? A white elephant? The white cliffs of Dover? Speak man!’.

Compare it to this…

(Shots are heard. Inspector Clouseau leaps into the library hilariously slipping in a pool of blood and landing next to Kato lying on the floor. Kato draws one last breath.)

The jewels are recovered and the mystery is solved with less fuss (but more slapstick).

This doesn’t just apply to people dying, of course, the same confusion could arise from those less fatal situations in which a letter is torn in half or a person is surprised into silence mid-sentence.

You whom I respect!

However, I am glad we no longer have that tu/vous distinction so many languages have. We did have ‘thou’ and ‘you’, ‘thou’ being informal and ‘you’ being more respectful back in Shakespeare’s day. I like the egalitarian respect for all implied by the universal ‘you’ which we keep, and I expect we’re all more respectful because of it!?

What would you do to improve the English language if you had the opportunity?

1 thought on “What’s wrong with English?”